[Twenty six years ago, Vi Lane and her family were set. She and her high school sweetheart Rod owned three KFC restaurants and a video store. But a lump developed on Rod's neck, and four years later, Rod died from complications related to oats-cell carcinoma. Rod's treatment cost millions of dollars, and without health insurance, Vi sold the family's businesses to settle the hospital bill for 2.5 million dollars.

Vi has always worked, but with her 70th birthday looming on the horizon, she had settled into a solitary life in a two-story house she rents near downtown Platte City.

Eight months ago, shortly after Vi's 22-year-old granddaughter Cyndi Perkins found out she was pregnant with her second child, she and her 18-month-old son Thomas Brown moved in with Vi.

Cyndi works for Y Club, an after school program south of Platte City, and she hopes to teach second grade once she gets her degree. She makes $9.25 an hour but is not allowed to work more than 28 hours each week so that her employer isn't required to enroll her in health insurance. Cyndi's hospital stay for the birth will be covered by the new Missouri Uninsured Women's Health Services program, but the only hospital that will take that insurance is a 35-mile drive from home.

Though health insurance woes continue to plague them, this unexpected family has brought a sense of cohesion and has filled Vi's solitary home with love.]

Vi Lane reaches out to her great-grandson Thomas Brown as they drive through Platte City on Tuesday, September 23, 2014. Lane lost her family's four businesses after the death of her husband 22 years ago, and though the future continues to be unclear, she is grateful for the time with family. 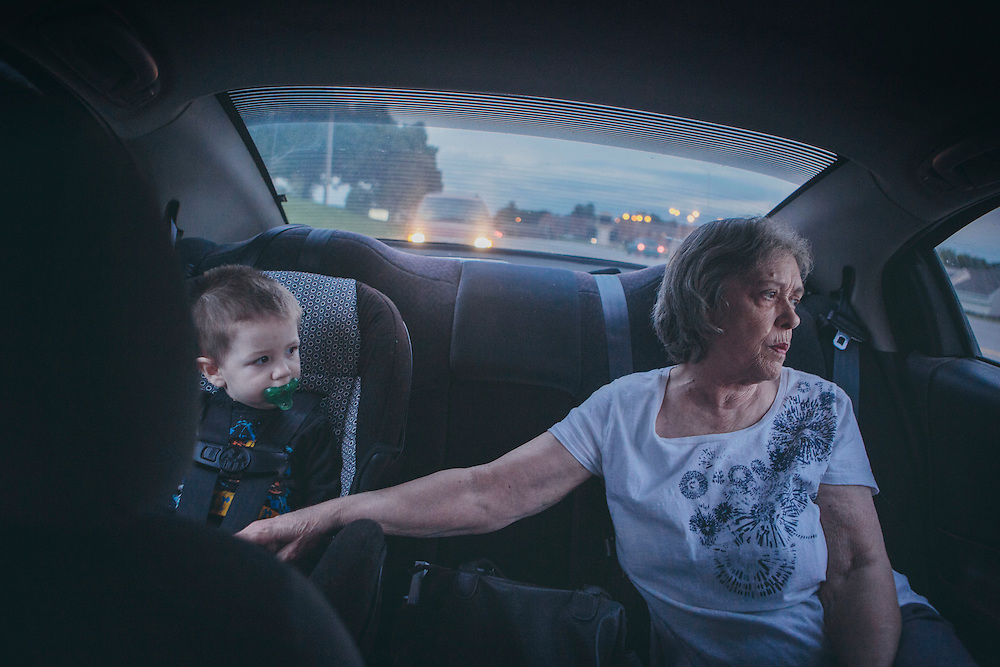